In December last year the museum received this Hohner Atlantic III from 1953 as a gift.

At that time the donor, Wolfgang T., had the instrument in the Ilner music store in Siegen / Westf. acquired. He had completed his apprenticeship at this point and was therefore eagerly waiting for the new instrument, which was made of a metal housing. Later owner and accordion moved to Hamburg.

The instrument includes "Technical explanations for the piano accordion Hohner - Atlantic III", in which it is promised that the instrument can be dismantled "without any tools".

With this instrument, weighing just under 11 kg, Hohner started one of her most famous series of accordions after 1950. The Atlantic was and is a popular instrument for all possible uses, popular with the accordion orchestra as well as with solo entertainers.

The housings were available in the familiar black, but also in red, blue, green and ivory. The top changed in the 1960s, when the "Hohnermännchen" came onto the treble top.

The instruments were offered as 3- and 4-voices instruments. The 4-voices were available with a triple tremolo or with a 4' register. 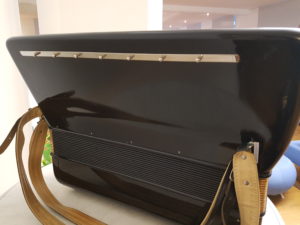 With our instrument you can see a slide on the treble in the picture on the right. With this slide the blind can be opened and closed. The instrument sounds warmer due to the closed blind.

Wolfgang T.'s son brought the playable instrument from Hamburg to Trossingen in the original case.